The most recent smartphone revealed by Sony is the new Xperia Z2, the upgraded kin of the Xperia Z1, a highly competitive gadget that sports an improved screen, processor and memory and a more complex camera also. You can now Unlock The Sony Xperia Z2 here.

In order to show it at its best capacity, it would be very interesting to compare with another smartphone which is very similar, the HTC One M8. Putting them together will highlight the amazing experience that you can have using either of the two phones.

The appearance of the Z2...

We thought it would be an inspired idea to take the last flagships smartphone launched in 2013, the LG G2 and one of the first ones to be launched in 2014, the HTC One M8, and put them into balance, because they are both amazing gadgets that need to be showcased at their best possibilities.

Although you might tend to say that the HTC has clearly more advantages because of the improvements in hardware, you will be surprised of how well the LG G2 is prepared.

When it comes to the appearance, the battle between plastic and metal is... 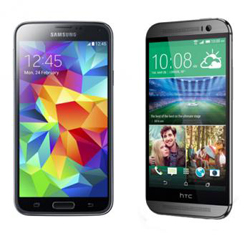 Although they haven’t been officially released yet, these two flagship smartphones of 2014 will surely compete for being the most desired gadgets of the year. No matter if the Samsung Galaxy S5 is clearly a much disputed and waited phone and many passionate of the brand will rush to buy it once it will be out, the HTC One M8 is clearly on the list of best competitors and it will offer a hard time to the Korean company. Let’s compare some of the characteristics of the two gadgets and see how they stand.

Although Samsung has kept a...