The Samsung Galaxy A8 (2018) is one of Samsung’s latest models within their range. But it comes with a lengthy list of similarities with the Galaxy S8 such as their Super AMOLED Infinity Display, Samsung Experience interface and 3,000 mAh battery. However, the performance is not the same and neither is the processor or camera.

Check out here how to unlock your Samsung Galaxy A8 2018

While the Samsung Galaxy A8 looks similar to the Galaxy S8, there are a lot of differences too. The Galaxy A8 has much bigger bezels which sadly...

We’re going hands on to give the brand new Galaxy S7 an in-depth review. If you want to know anything about the new Samsung flagship, this is the place to be. We’ve separated aspects of this smartphone into different sections to make for easier reading.

First up let’s talk about the build design of the Samsung Galaxy S7. At this point it should be no surprise that Samsung’s flagships are beautifully crafted with an insane attention to detail. The Galaxy S7 has been designed to feel sleek, streamlined and exceptionally...

The Galaxy S7 Edge is looking to be the frontrunner for the Samsung camp in 2016 and whilst the standard version will sell well, the Edge variant may just be the top selling Samsung device this year.

There are plenty of things about both the Samsung Galaxy S7 Edge and the standard S7 that are similar, but we think that the few things that are different are much more noticeable. We’ll be talking about the S7 Edge in our hands on review below.

After a long hiatus, Motorola revived the Droid name for the Motorola DROID Turbo 2. We decided to put the Turbo 2 up against the ultimate champion in the Android scene, the Samsung Galaxy S6, to see just how well the Droid Turbo 2 fairs. We aren’t expecting the Turbo 2 to come out on top, but we’d love to see what kind of results do come out of this.

The Droid Turbo 2 released near the end of 2015 so Motorola has had a chance to pick out the right parts and finetune their design.

Unfortunately for the Turbo 2, Samsung has...

The end result is quite spectacular. Read more about the S6 Edge Plus and our detailed thoughts on it below.

This is obviously the area that is going to get the most attention for the Galaxy S6 Edge Plus. Samsung really outdid themselves with their redesign of the S6 and the S6 Edge, and the design...

It’s time to put the two phablet titans from Samsung up to the test. Which one will come out on top? It will be a gruelling battle, but hopefully by the end of this article you’ll have a better idea over which one to pick.

Instead of going into full detail about each device, we’ll be focusing on the differences between the two to give you a quick up to date analysis and comparison.

First things first - Samsung has put a lot of effort into all of their devices this year to send off a big message. They are capable of doing... 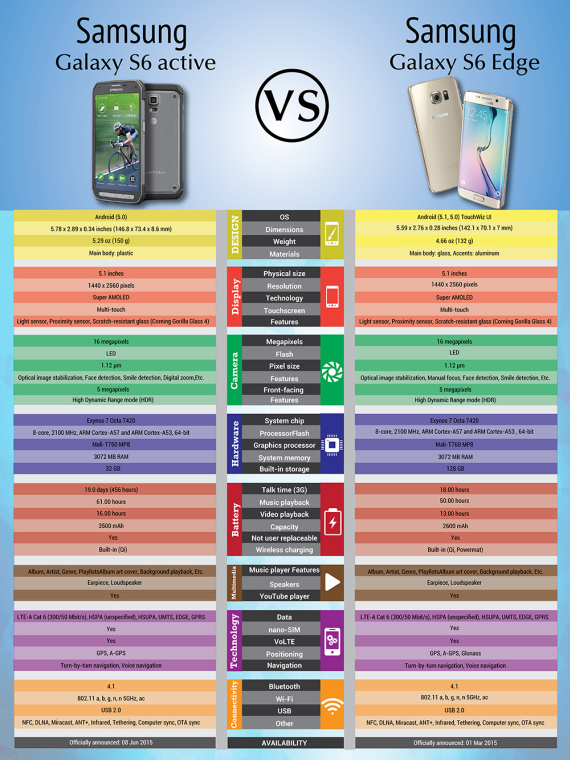 We often focus on battles that happen between Android handsets, but the real war has always been between the very best Apple has to offer and the very best Android manufacturers have to offer.

For this reason, there’s no better battle in the smartphone industry right now than the one between the Apple iPhone 6 and the Samsung Galaxy S6 Edge.

Which of these devices comes out on top? Maybe there’s no straight forward winner, but we can still do our best to put each of them to the test.

There’s really quite a lot to say...

The LG G3 is definitely one of the most impressive smartphones by LG to date, but Samsung has managed to release a device this year that might just be their own most impressive handset.

Which one comes out on top? Even though some of the LG G3’s features are outdated, we can still give the two a pretty fair comparison.

LG has definitely taken quite a few design cues from Samsung’s books over the years, but Samsung threw a curveball with the Galaxy S6 that LG could have never expected.

The end result is a beautifully...

The Samsung Galaxy S6 Edge and the Sony Xperia Z3 are almost from two completely different worlds. Despite both of them running Android, the overlay for both devices makes each feel very different from one another. The same can be said for the build quality - the S6 Edge has a smooth, curved design whilst the Z3 has a more in your face stylized appearance. In this review we take a look at everything each smartphone has to offer.

Here’s the thing - it’s quite clear that the Samsung Galaxy S6 Edge looks and feels like one of...